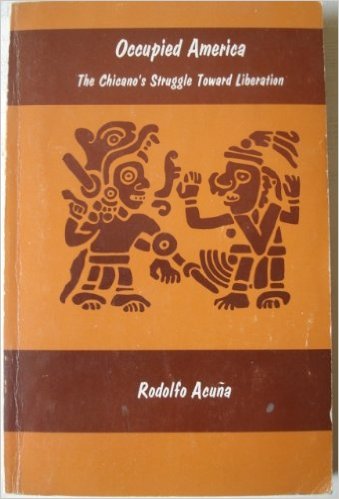 More writings on internal colonialism are being planned. I post this excerpt from the introduction of this book to advance discussion. Posting does not imply endorsement or affiliation with everything said here.

“Mexicans – Chicanos – in the United States today are an oppressed people. They are citizens, but their citizenship is second-class at best. They are exploited and manipulated by those with more power. And, sadly, many believe that the only way to get along in Anglo-America is to become “Americanized” themselves. Awareness of their history-of their contributions and struggles, of the fact that they were not the “treacherous enemy” that Anglo-American histories have said they were-can restore pride and a sense of heritage to a people who have been oppressed for so long. In short, awareness can help them to liberate themselves.” (p. 1)

“…the title of this monograph might appear to be a misnomer. Many readers will argue that Occupied Mexico would have been more appropriate since the monograph is about the occupation of an area formerly belonging to Mexico. While this argument is valid, I feel that Occupied America is more precise, for “America” is the identification that Europeans gave to two continents. When the name was later appropriated by thirteen colonies, the designation “America” was deemed the exclusive province of the new nation, and United States citizens considered themselves the “Americans.” Chicanos, as well as other peoples, however, refute this exclusivity and correctly maintain that all inhabitants – on both north and south continents – are Americans and that the whole hemisphere is indeed America. Thus, I hold that Anglo control of Mexico’s northwest territory is an occupation of a part of the American hemisphere.” (p. 2)

“…some U.S. citizens of Mexican extraction might object to the identification of “Chicano” in the title, for many call themselves simply Mexicanos or Mexicans. Moreover, a minority refer to themselves as Spanish-Americans or Latin Americans. Recently, the label Mexican-American has become popular, following the hyphenization tradition of other ethnic groups. Anglo-Americans have promoted the use of this label, and for a time it seemed as if it would be universally accepted. But within the last four years, activists have begun to question this identification. At first, some just dropped the hyphen and symbolically broke with the Americanization tradition. Others sought to identify themselves with a name of their own choice. They selected the term Chicano, which had often been used to designate lower-class Mexicans. Even though it had negative connotations for the middle class, activists considered that it was a symbol of resistance as well as a demand for self-determination. Such self-identification is, I believe, a necessary step in the process of awareness by which Chicanos can liberate themselves collectively. (p. 2)

“Central to the thesis of this monograph is my contention that the conquest of the Southwest created a colonial situation in the traditional sense-with the Mexican land and population being controlled by an imperialistic United States. Further, I contend that this colonization-with variations-is still with us today. Thus, I refer to the colony, initially, in the traditional definition of the term, and later (taking into account the variations) as an internal colony.” (p. 3)

“I feel that the parallels between the Chicanos’ experience in the United States and the colonization of other Third World peoples are too similar to dismiss. Attendant to the definition of colonization are the following conditions:

1. The land of one people is invaded by people from another country, who later use military force to gain and maintain control.

2. The original inhabitants become subjects of the conquerors involuntarily.

3. The conquered have an alien culture and government imposed upon them.

4. The conquered become the victims of racism and cultural genocide and are relegated to a submerged status.

5. The conquered are rendered politically and economically powerless.

6. The conquerors feel they have a “mission” in occupying the area in question and believe that they have undeniable privileges by virtue of their conquest.

These points also apply to the relationship between Chicanos and Anglos in Mexico’s northwest territory.

In the traditional historian’s viewpoint, however, there are two differences that impede universal acceptance of the reality of Anglo-American colonialism in this area.

1. Geographically the land taken from Mexico bordered the United States rather than being an area distant from the “mother country”.

Too many historians have accepted-subconsciously, if not conveniently-the myth that the area was always intended to be an integral part of the United States. Instead of conceptualizing the conquered territory as northern Mexico, they perceive it in terms of the “American” Southwest. Further, the stereotype of the colonialist pictures him wearing Wellington boots and carrying a swagger stick, and that stereotype is usually associated with overseas situation-certainly not in territory contiguous to an “expanding” country.

2. Historians also believe that the Southwest was won in fair and just warfare, as opposed to unjust imperialism.

The rationale has been that the land came to the United States as the result of competition, and in winning the game, the country was generous in paying for its prize. In the case of Texas, they believe Mexico attacked the “freedom-loving” Anglo-Americans. It is difficult for citizens of the United States to accept the fact that their nation has been and is imperialistic. Imperialism, to them, is an affliction of other countries.” (p. 3-4)

“In discussing the traditional and internal colonization of the Chicano, it is not my intention to rekindle hatreds, nor to condemn all Anglo-Americans collectively for the ignominies that the Mexican in the United States has suffered. Rather, my purpose is to bring about an awareness-among Anglo-Americans and Chicanos-of the forces that control and manipulate both seven million people in this country and keep them colonized. If Chicanos can become aware of why they are oppressed and how their exploitation is perpetuated, they can work more effectively toward ending their colonization.” (p. 5)

8 Responses to Chicanos as as Internal Colony: Notes from Occupied America: The Chicano Struggle for Liberation (Rodolfo Acuna, 1972) – Introduction